As a parent, one of our primary concerns is keeping our kids healthy and happy.  We make sure they are eating right, having an active lifestyle and not getting too much screen time.   Surprisingly, there are a few common kid-behaviors that we as parents may often see our kids doing, without even realizing the potential danger.

SWINGING A CHILD BY THEIR ARMS: Picture the following scenarios:

I’m sure we have all done one of these things at some point and to some extent, this may be a necessary risk, but it is a risk all the same.  Pulling a child abruptly by the arm or holding he/she up by his/her arms has the potential to cause radial head subluxation. Believe it or not, depending on the child, it may not take much force for this to happen. Also called Nursemaid’s elbow, this is common in children because their bones are still growing and have loose ligaments surrounding them.  A abruptly yank or pull could cause the annular ligament to slip over the round portion of the bone. According to KidsHealth.org this is most often seen in children between the ages of 1 and 4.

If your kids love to be swung around, something to consider is grabbing them under their shoulders instead or asking them pull up a little bit to create a slight bend in the elbow as they swing.  This muscle contraction will help protect their ligaments.  It’s a good idea however, not to engage in this behavior too often when your children are little. 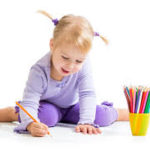 THE “W” SIT:  Usually seen in toddlers, the “W” sit is when a child sits with bum resting on the ground between their legs, legs out to either side with both knees bent and their feet tucked under them. We may marvel at the fact that our kids can actually sit this way! Some kids prefer this position more than other and typically utilize it when playing on the floor. Moving in and out of this position for very short periods is not terrible, however, when the child is sitting in the “W” position for long periods, it can raise some concern.

In my case joint laxity and loose ligaments runs in the family, so when I saw my 18-month old daughter starting to sit in this position for long periods, I immediately corrected her. I simply would lift her up and put her into a better position that still allowed to play. For example, I would lay her on her stomach to color, or have her sitting with her legs stretched out and a toy between her legs. 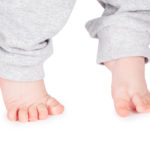 TOE WALKING:  Toe walking, when the child walks on their toes or the balls of their feet, is very common in children that are learning to walk.  Typically, it is not something that should cause concern, however, according to Mayo Clinic, it should raise some concern when the child is still toe walking after the age of 2 years. Possible causes for kids to continue toe walking past the age of 2 include:

Toe walking does not necessarily mean that your child has one of the conditions listed above, however should this behavior continue past 2 years old, it is a good idea to ask your doctor about it.

Well there you have it, maybe you’ve seen these behaviors in your kids and maybe you haven’t, but either way, you are now a little more prepared to keep young kids safe!